We should have been aware of it for a long time. At least since it was established that even the charter of privileges of the University was written by one of its theologians: Paul of Geldern, an influential clerk from the early Faculty of Theology in Vienna, drafted the University’s solemn charter in 1384.[i] Paul of Geldern was indeed one of the most zealous scribes from the first generation of Viennese theologians. He wrote not only to carry out a command of Duke Albrecht III, but also to lay down, among other works, the first part of the majestic commentary on Genesis, produced by his colleague Henry of Langenstein and preserved in Vienna ÖNB Cod. 4841, his own principial lectures and Sentences commentary in Erfurt CA fol. 173, or a disputed question in Erfurt CA fol. 60.[ii]

So it should come as no real surprise that the Viennese theologians wrote many texts in their own hands. When speaking of their duties at the University, especially the Faculty’s administration[iii] and significant teaching matters appear to have been written by the deans and the teachers. Faculty acts have long been studied and edited. But why not put aspects of Viennese teaching under the palaeographical magnifying glass? From the Faculty of Theology, the Sentences Commentaries and their introductory lectures, the so-called principia emerge as a first relevant subject of enquiry.[iv] The most valuable witness in this field is Nicholas of Dinkelsbühl’s handwritten commentary from the beginning of the 15th century, preserved in Vienna Schottenstift 269 (274). Dinkelsbühl’s commentary is identified as the main source for his contemporaries in the Vienna Group, who copied and reused the text of their common master in their own lectures on Lombard’s Sentences producing the so-called Vienna Group Commentary.[v] Now these copy-pasted commentaries were very often written by the re-users themselves, as is evident in some manuscripts held in Vienna. Peter of Pulka, who lectured on the Sentences between 1403 and 1405, left the commentaries on Book I, II and III along with biblical and sentential principia in autograph manuscripts in ÖNB Cod. 4668, Cod. 4713 and Cod. 4939.[vi] One further example from a decade later has long been unknown; however it belongs to the prominent Viennese intellectual, John of Gmunden. Paul Uiblein noticed as early as 1973 that ÖNB Cod. 4422 must contain Gmundenʼs commentary on Book II of the Sentences.[vii] Not only did the manuscript belong to Gmunden, but it was written down by him for its major part. Moreover, the watermarks allow a precise dating of the codex to the years when Gmunden lectured on Lombardʼwork: the biennium of 1416–17.

Sometimes, autograph marks are more restrained. ÖNB Cod. 5067’s principia and the commentary on Book I of the Sentences have recently been identified as belonging to John Angrer of Müldorf.[viii] Besides the arguments already listed, one palaeographical proof could be introduced in favour of Angrer’s authorship, or more precisely, against the long supposed authorship of John Wuel of Pruck, the scribe of ÖNB Cod. 5067. For the explicit of John Wuel of Pruck is followed by a further remark in a different hand: “In die sanctorum Gervasy et Prothasy finivi primum Sententiarum legendo anno etc. vicesimo secondo.” This second hand, using the first person singular for having lectured on Book I of the Sentences in 1422, must be that of the author of the commentary on Book I. 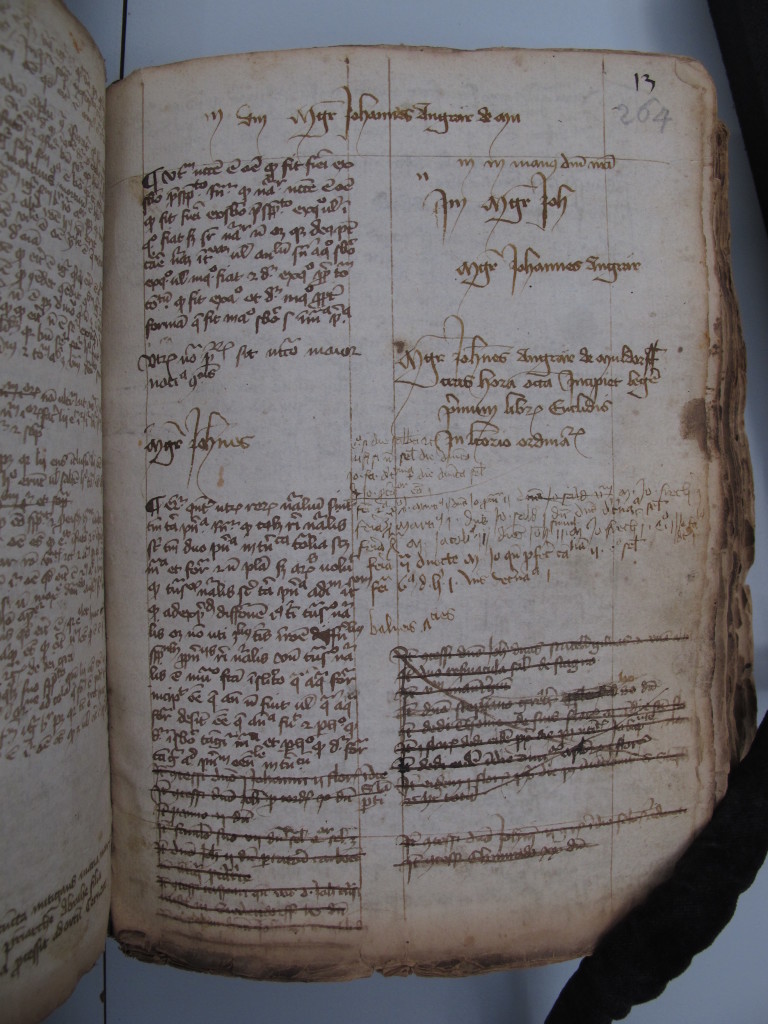 The same pattern of dating lectures secundum alium in one’s own hand seems to have been used much later by the Dominican Professor, Leonard Huntpichler. Huntpichler lectured in 1446 on Book III of the Sentences of Narcissus Herz of Berching, as can be deduced from Cod. 109/75 of the library of the Viennese Dominicans. Cod. 109/75 contains the Commentary of Narcissus along with a principium, ample marginal notes and a dating alternately from Leonhard Huntpichlerʼs or his secretaryʼs hand. On f. 135r, it is nevertheless Huntpichler who notes and confirms his lecturing secundum Narcissum: “Distinctio 22. Hanc legi anno 46 in vigilia assumptionis in alma universitate viennensi in Austria.”[ix]

In contrast to the collective Sentences commentaries of the Vienna Group, the principia reflected faculty debates and substantiated individual positions of the lecturer starting his courses. From the early 15th century, ÖNB Cod. 4593, ff. 100r–126v contain the sentential principia and lists of question from biblical commentaries of Theodoric Rudolfi of Hammelburg. These principia can be ascribed to Theodoric, since Paul Uiblein has already identified his handwriting in this part of the manuscript,[x] and also for many concordant elements. The principia are dated to 1411 and 1412, and do refer to the concurrently reading John of Basilea OP, at that time prior of the Viennese Dominicans, and Ulrich of Patavia. Incidentally, they contain the protestaciones stipulated in the Faculty statutes.[xi] 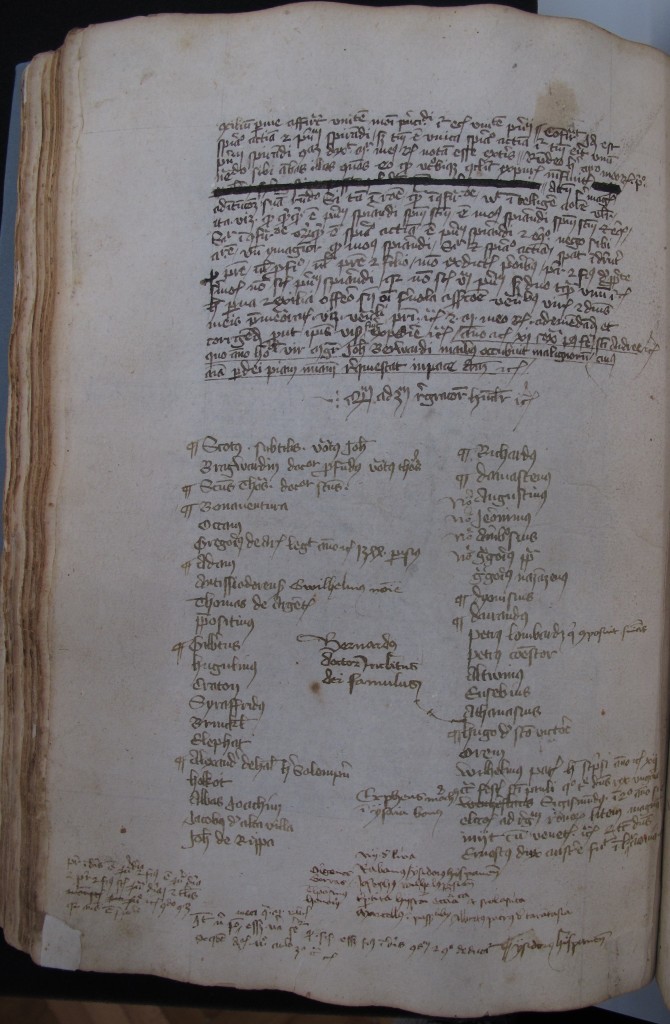 One further example of principia written in the author’s own hand is to be found in Schottenstift 254 (230). This other manuscript of the Viennese Benedictines holds a Sentences Commentary attributed to Nicholas of Dinkelsbühl gathered by Martin of Lewbicz OSB, in which the first folios enclose a set of principia written in a hand different to the rest. Among the candidates for the authorship of these principia (Andreas of Waytra, Urban of Melk, John Nider OP) from 1423–25,[xii] Andreas of Waytra appears most likely to have drafted, corrected and added marginalia to these pages; in other words he is the author of these principial lectures.[xiii] 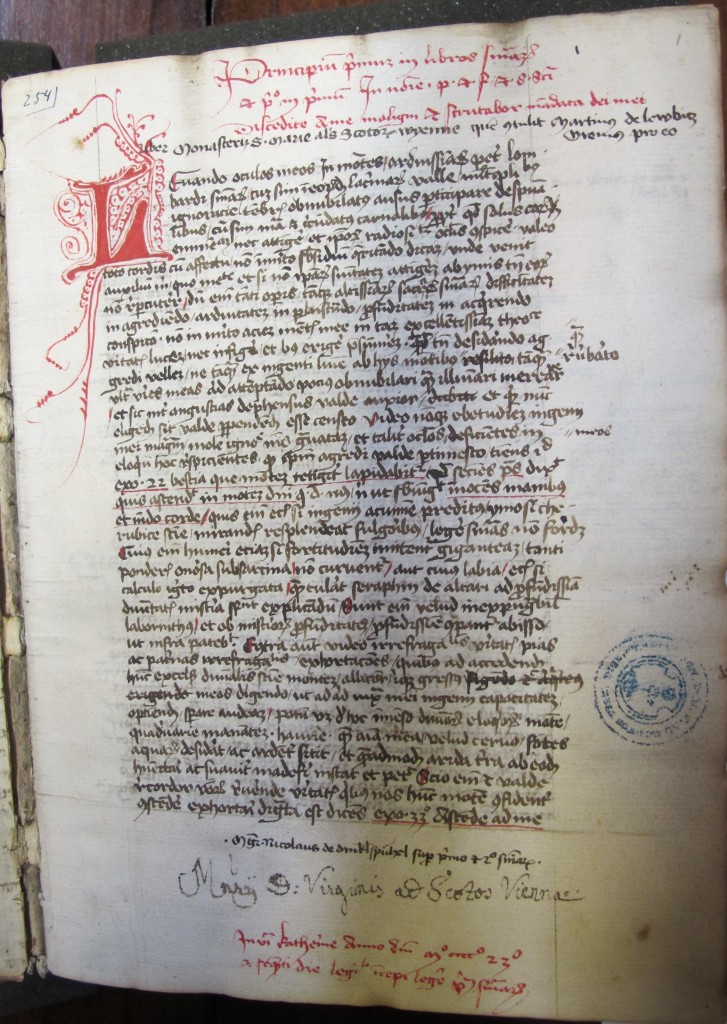 Putting together these more or less recent pieces of the jigsaw offers a rather elaborate picture of the Viennese practice of Sentences commentaries. We realise that we are presented with so many autographs of Sentences commentaries or their principia in Vienna that writing these texts in one’s own hand must have been the silent, but persistent rule, irrespective of the degree of “originality” of the content. Appealingly for our concept of the Vienna Group Commentary, quasi identical Sentences commentaries appear to have been patiently copied or provided with meticulous marginalia, undermining the theory of pointedly careless Viennese theology. Handwriting denotes individuals within the common project of the Vienna Group. While authorship must finally be attributed to the selection of certain texts which constitute the Sentence commentary of a Peter of Pulka, a John of Gmunden or a John Angrer of Müldorf, it is nevertheless primarily identical with handwriting.

Finally, whichever generation we look at, Viennese theologians from Paul of Geldern onwards offer us handwriting as a typically individual feature magnifying their own efforts. This should definitely encourage us to recognise the subtle doctrinal differences between particular authors.

[iv] I am working on an updated list of Bible commentaries from the University of Vienna (1384–c. 1420), several of which were also written down by the authors themselves.

[v] M. Brînzei – Ch. Schabel, „The Past, Present, and Future of Late Medieval Theology: The Commentary on the Sentences by Nicholas of Dinkelsbühl, Vienna, ca. 1400″, in Ph.W. Rosemann, Mediaeval Commentaries on the Sentences of Peter Lombard (Leiden 2015), vol. 3, 174–266.

[viii] W. J. Courtenay, „From Dinkelsbühlʼs Questiones Communes to the Vienna Group Commentary. The Vienna ‘Schoolʼ, 1415–1425″, in M. Brînzei (ed.), Nicholas of Dinkelsbühl and the Sentences at Vienna in the Early Fifteenth Century (Turnhout 2015) 287–291.

[xiii] I thank Martin Wagendorfer, who kindly confirmed my supposition. I would nevertheless leave the question open, whether the commentary included in Schotten 230 also belongs to Andreas of Waytra.

Uibleinʼs notes in volume 2 of the AThF provide more identification of autograph manuscripts than those randomly quoted above.