The Benedictine Monastery at St Lambrecht, the St Michael’s School in Vienna and a Disputed Question from the University (Graz Ms UB 443)

In this short note, I shall not be doing anything other than drawing attention to a significant witness to the early history of the University of Vienna in commenting upon one catalogue entry. This witness, Ms 443 of the University Library at Graz,[i] is a two-volume codex which originally belonged to the Benedictine monastery at St Lambrecht.[ii] The two volumes contain a partial version of the Catholicon by the Dominican John Balbi, an encyclopaedia on Latin grammar from the late thirteenth century used as a tool for Bible interpretation, but also for gathering valuable information for the “educated citizen”.[iii] Balbi’s work, somewhat in contrast to its intended readership, was principally to be found in monastic libraries. The exemplar in Graz Ms UB 443 not only features the double-sided use and diffusion of the work, but, more unexpectedly, points to connections between Viennese grammar schools and the university.

Both volumes of Ms UB 443 were written on paper at the very beginning of the fifteenth century, and were bound in the same green leather cover. They do not carry St Lambrecht monastery’s ownership inscription, only shelf marks proving their origins. Significantly, both were part of a chained library. The first volume of Ms UB 443 contains an abrupt explicit in the middle of the manuscript. It stands at the end of Book IV of the Catholicon on f. 104v, and reads as follows: 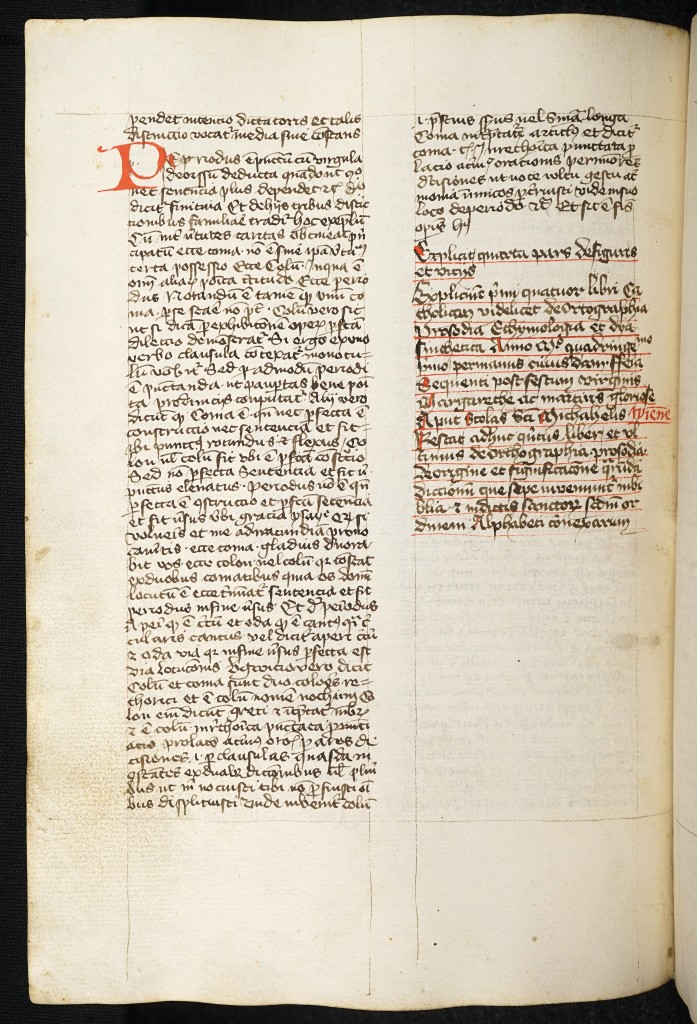 The striking information in this account is that the manuscript was copied at St Michael’s School in Vienna, the city’s name having been added in the same hand in red ink, probably while the scribe outlined and checked the text of the explicit. According to the school statutes from 1446, St Michael’s was one of four public schools in Vienna, for which there is only sparse information in historical sources. Its first mention is in 1352, when a building was leased to the school by the Scottish monks. But nothing is known about the library of this school primarily intended to provide Latin education to lay people.[iv] To date, Graz Ms UB 443 constitutes the only testimony to the medieval library of St Michael’s School. This evidence is not even as indirect as it would appear from the manuscript’s having belonged to the Benedictine monastery of St Lambrecht. For the intriguing fact that both codices were incatenati attests that they were written for the public library of St Michael’s School in Vienna: they were chained and used at St Michael’s Latin school before being transferred to St Lambrecht’s monastery, which might not have occurred until the school’s library was dissolved.[v]

Interestingly enough, the Collegium ducale also owned a Catholicon, dated to exactly the same time when the St Michael’s exemplar was produced: ÖNB Cod. 2274 and 2275 were donated to the theological library of the university by Johannes Stüblein de Bibart, a schoolmaster (!) from Klosterneuburg, who studied at the University of Vienna from 1387 to roughly 1400. These copies of the Catholicon owned by the Collegium ducale, dated ca. 1400–1405, were made either in Klosterneuburg or in Vienna.[vi] Although different scribes executed the copy for St Michael’s and the Collegium ducale, their simultaneous production indicates that Johannes Stüblein must be in connection with the introduction of the Catholicon to both St Michael’s School and the University of Vienna.

The story could end here, and our scribe could have continued to produce his copy of the Catholicon at St Michael’s, but another person seems to have used the unexplained down-time and copied part of a disputation from the University of Vienna into the same quire (ff. 103–114). This hitherto unacknowledged academic disputation falls within the timeframe of the Catholicon copy, as it concerns the appearance of the comet C/1402 D1 in mid-March 1402.[vii] This natural phenomenon provoked discussions at the University of Vienna, as demonstrated by the disputation on the subject copied on ff. 105v(!)–107 in Graz Ms UB 443: “Utrum cometa sit exalacio calida et sicca futurorum eventuum presignata.” The theme of comets was usually part of philosophical discussions, featuring especially in commentaries on Aristotle’s Meteorology.[viii] It had, moreover, a tradition in the Viennese school of theology, since Henry of Langenstein, while at the University of Paris and at the request of Charles V, king of France, commented a similar event in an extended treatise beginning with the same question:

Langenstein’s insight, unlike the Viennese reflection, was a solitary product. Regarding the Viennese version of the debate, the explicit of the disputation on fol. 107 in Graz Ms UB 443, written in a hand different from the rest, provides information about the different participants: 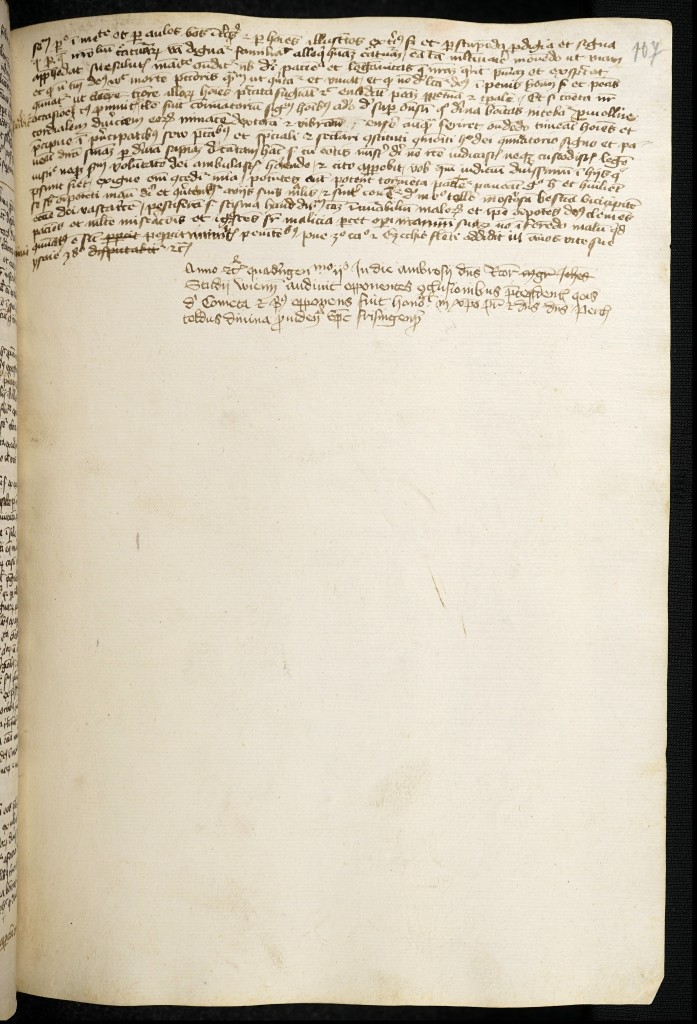 The explicit of the university disputation on f. 107

So shortly after the astronomical apparition in mid-March, the University of Vienna organised a disputation presided over by its rector. For an unknown reason, his name – John Berwart of Villingen held those responsibilities – has been crossed out. Much more evident is the deferential presentation of the first opponent in the debate, whose answer to the question must have been approved as right by the rector and is thus transmitted on the preceding folios: the bishop of Freising, Berthold of Wachingen.[ix]

The question that naturally arises concerns Berthold’ knowledge of Langenstein’s question on comets: did the former read or quote the latter? Speaking only in prosoprographical terms, Henry of Langenstein and Berthold of Wachingen, incidentally chancellor of the Habsburg dukes, were well known to each other for having participated in the foundation of the Faculty of Theology at Vienna. Stylistically exigent, Langenstein, an accomplished poet among the first Vienne theologians, even conceived a versified panegyric letter to Berthold, which survived in several manuscripts.[x]

With Langenstein writing Latin poems, we are not that far from our original inquiry about an exemplar of the Catholicon from St Michael’s School in Vienna. To summarise the unique aspects of Graz Ms UB 443: it is the only direct witness to the library of one of Vienna’s grammar schools, which carries the only evidence of an extraordinary disputation held at the University in 1402 and at the same time the only testimony to theses defended in a public disputation by Berthold of Wachingen. It might also be the testimony to the interest Viennese schools showed in astronomy and astrology from the early fifteenth century. But where was the disputation copied, was the manuscript of the Catholicon taken out to the university, or was rather academic material, including disputations, available for copying in St Michael’s School? Both hypotheses appear dubious. One thing about which we can be certain is that students of the school or users of its library were consequently aware of burning astrological issues discussed by prominent personalities at the highest academic institution of their city.

[i] See the catalogue entry by H. Zotter: http://sosa2.uni-graz.at/sosa/katalog/ (enter the number 443 where you see 1000 in a case). There is a summary mention of this Ms in M. Shank, „Academic Consulting in Fifteenth-Century Vienna: The Case of Astrology“, in E. Sylla – M. McVaugh (eds.), Texts and Contexts in Ancient and Medieval Science, Leiden 1997, 253-4. Page 269, Shank notes that Peuerbach „curiously“ lectured on astronomy at the Bürgerschule and not at the university.

[iii] On the Catholicon see the Wikipedia article https://en.wikipedia.org/wiki/Catholicon_(book) (accessed 20.07.2016).

[v] The late arrival of the manuscripts at the monastery would explain why they do not have the older ownership inscription, only St Lambrecht numbers. Furthermore, it is not characteristic for St Lambrecht manuscripts to be chained. For the brief history of the monastery’s library see G. Möser-Mersky, Mittelalterliche Bibliothekskataloge Österreichs. Vol. III: Steiermark, Vienna 1961, pp. 77–86. The concluding volume to the St Michael’s exemplar of the Catholicon must have been lost.

[vi] There is ample literature on the ÖNB codices; see especially the extensive description in A. Fingernagel (ed.), Mitteleuropäische Schulen II (ca. 1350-1410): Österreich – Deutschland – Schweiz, Vienna 2002, vol. I, pp. 338–40, and vol. II, pp. 385–88. Only a close comparison of the Graz and Vienna copies could reveal the precise nature of their interdependence, but it seems more likely that the St Michael’s copy is based on the university’s exemplar.

[viii] Relying consequently on manuscripts held at the University Library of Graz, Ms 884 contains on ff. 289v–293 the copy of „De cometa questiones metherorum“. See the complete digitised version of the manuscript online: http://143.50.26.142/digbib/handschriften/Ms.0800-0999/Ms.0884/index.html (accessed 21.07.2016). The copy originally belonged to the Cistercian monastery at Neuberg, which possessed further writings from the University of Vienna.