Norwegian Book Fragments and the Internet

As the headline indicates, this post is about Norwegian book fragments, not Austrian manuscripts, and I hope that this fact does not scare away any readers. I certainly appreciate the opportunity to appear as a guest on the Iter austriacum!

The background for this guest-post is a collaborative session at the international Medieval Congress in Leeds in July of this year, on medieval fragments in the digital age. The session demonstrated that there are quite a few people out there who are tackling the issues and challenges connected to manuscript fragments and that, no doubt, the best solutions will come through discussion and collaboration with others.

The digital age holds incredible potential for manuscript material – perhaps even more so for the fragments than for complete manuscripts, because of the possibility to digitally piece together manuscripts that for some reason have been destroyed. The lack of a binding is no disadvantage in a digital format!

There are several collections where groups of fragments to some extent are “reconstructable”, such as the large fragment collections in the Nordic countries. Combined they hold about 50 000 book fragments from various book genres, although the majority of the fragments come from medieval liturgical books rendered useless after the Reformation in the sixteenth century. Norway’s share of the fragments count ca 6000 single pieces, most of which are in the National Archives in Oslo.

From leaves to covers

… and from covers to even smaller fragments; this basically sums up the history of Norwegian manuscript material, particularly that written in Latin. Very few Latin manuscripts used in medieval Norway have survived as books, only about a dozen. What we do have are fragments, surviving as binding material on account books sent to the Danish royal administration in the late sixteenth and early seventeenth centuries. The 6000 fragments are estimated to come from about a thousand highly fragmentary books – leaving us in average about six fragments per book.

The size and character of the fragment collection in Norway stands in contrast to that of our neighbour, Sweden. The Swedish National Archives hold ca 22 500 parchment covers, in the form of large leaves or bifolia from medieval books. In Norway, only very few fragments survive as covers. Most leaves were cut into smaller pieces and used to strengthen the seam at the spine of the paper leaflets. In other words, in Sweden four fragments may constitute a full quire, while in Norway four fragments may equal half a leaf, or not even that.

Another consequence of different binding practices is that the Norwegian fragment collection includes fragments from very small books, which would be disregarded for binding purposes in Stockholm or Copenhagen, simply because they would not be considered big enough to do the Job. 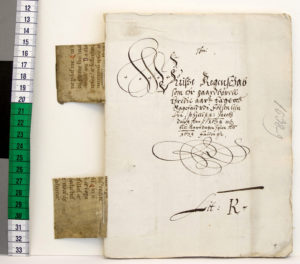 Accounts from the Trondheim area in Norway, bound with two fragments from a small twelfth-century psalter. The book when whole measured only about 10 cm in width, a small book even for Norwegian bindings. Oslo, National Archives, In situ fragments, LR, Fosen 1638-39 Pk 63, 1, K (Photo: Åslaug Ommundsen)

Some here, some there

Some manuscripts – or codicological units you might say – have been divided on collections in two or more Nordic countries. The reason for this is historical. At the time of the massive reuse of abandoned liturgical (and other) books, Norway was under Danish rule, and the governors reported to Copenhagen. Likewise, Finland was, at the time, under Swedish rule, and its accounts were sent to Stockholm. In addition, the borders between the countries have changed after the Middle Ages and since the manuscripts were reused, so that Eastern part of medieval Denmark (Skåne) is now Southern Sweden, and some of the Eastern parts of Norway are Sweden, too. Any attempt to keep the research on the fragment collections strictly “national” would therefore be futile. Some codicological units consist of fragments from up to four different collections in different countries, like the case study presented below (although I should add that those cases are rather exceptional). 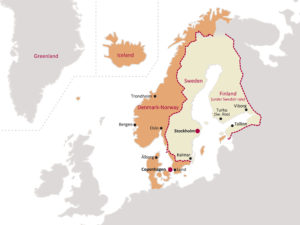 In the early 19th century the Norwegian accounts were returned from Copenhagen to Oslo after the establishment of the National Archives of Norway. At first, the book fragments on the accounts did not attract much interest, but interest grew over the nineteenth century. About 100 years ago, there was a project to detach the fragments from their respective accounts, sort them in envelopes and number them as separate items. About 330 fragments are still left in situ (and will remain so).

In such a situation, with fragments partly detached and in envelopes, partly in situ on accounts, and partly divided on different collections in different countries, digital tools are a godsend. By using digital photographs and computer software one can reassemble manuscripts regardless of their current location, and also make the “virtual manuscript” publically available on line.

In Bergen we have experimented with different web solutions, and are at the moment using fragment.uib.no to publish “virtual manuscripts”. Sites with “reconstructions” are obviously different from the collections’ own databases or websites, but they can certainly be important supplements, valuable as an aid to visualization and a facilitator for further research. 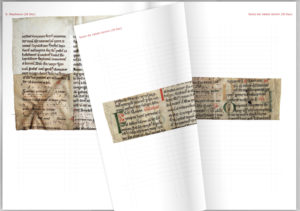 Example of a partially reconstructed “virtual manuscript” at fragment.uib.no (The Saint Alphegus Missal, with fragments from the National Archives of Norway). (Pdf: Åslaug Ommundsen)

Regarding the Nordic fragment collections and databases, Sweden was definitely in front, with its MPO project (Medeltida PergamentOmslag) which was initiated at the National Archives in Stockholm in 1993. The MPO database went online a few years ago, and is very useful.

Finland also funded a major project on their fragment material in the National Library in Helsinki in 2008, which resulted in a very good illustrated and searchable database of the so-called Fragmenta membranea Collection.

Iceland present fragments both on a specialized website for music, ismus.is, and on a general website for manuscript material, handrit.is.

Denmark has had significant scholars working on their fragment material in the National Archives and the Royal Library. In some ways their golden years were before computer databases and the internet, still there are some fragments available on line. One site presenting a small section of the fragments in the Danish National Archives, is liturgy.dk. Also, the Royal Library in Copenhagen has an excellent presentation of their fragments as part of their E-manuscripts at the website Fragmenta Latina Hauniensia.

In Norway the first institution to publish their fragment collection, was in fact the University of Bergen, with a presentation of their Digital fragment collection (NB: not to be confused with the undersigned’s various web initiatives, which also has url’s containing “fragment” and “uib.no”!) The National Archives in Oslo has recently finished a database following the principles of the MPO database in Sweden. An illustrated version available on-line is a few years away, though. In the anticipation of the official database in Oslo, their fragments should soon (autumn 2017) be available as part of the research data management plan of our fragment project in Bergen, with the National Archives’ kind permission.

In 2012 Bergen research foundation and the University of Bergen funded a four-year research project on Norwegian fragments, From manuscript fragments to book history. The project members, apart from myself, were Michael Gullick, Astrid Marner and Synnøve Myking, all exceptionally talented colleagues.

The advantage of having tall mountains between our project in Bergen and the main fragment collection in Oslo was that we needed digital photographs of everything in order to do our research, so we needed to establish an extensive photo collection early on. Fortunately, the National Archives in Oslo are very helpful and generous, allowing users to take photographs. One year into the project we had photographs of about 97-98% of the 6000 fragments available on our computers.

One web page was set up before the project started; fragments.app.uib.no with the help of the IT-department at the University of Bergen. Another page was designed as part of the project, fragment.uib.no, with the help of a private company, Reine Linjer. The sites have different structures and different strengths and weaknesses, but the plan is to link them together as part of the research data management plan mentioned above. The forthcoming on line source will contain our main research data, including the thousands of photographs from the National Archives.

For Leeds I chose a case study to illustrate some of of the issues mentioned above, namely a legendary, probably made in Northern France just before 1200 but used somewhere in the Lund area (in modern Sweden, but medieval Denmark) during the course of the Middle Ages. 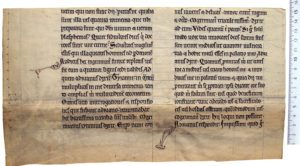 Half a page from the legendary referred to as Vitae 3, containing readings for Saint Adrian of Nicomedia. Oslo, NRA, Lat. fragm. 6,1. (Photo: Åslaug Ommundsen)

The book has taken two generations to reassemble to its current, still highly fragmentary state (but it is very likely that more fragments are yet unidentified), moving from nine to 19 fragments:

This case illustrates how different a post in a fragment inventory would work compared to a “virtual manuscript”. Several years ago we registered the codicological unit as Vitae 3 on fragments.app.uib.no, and listed the then-discovered fragments one below the other.

In the recent entry on fragment.uib.no the book is called A Northern French legendary in Lund, and can be leafed through in the form of a “reconstructed” book. This was made using the following low-cost “recipe”:

The result is a file where you can turn the pages, and get an impression both of how much is left from the manuscript, but also what the manuscript may once have looked like – and how much is actually still missing, such as in one of the leaves from Vitae 3, for example: 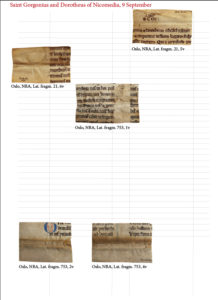 «Reconstructed» page from the legendary Vitae 3 at fragment.uib.no, contining the legend of Saint Gorgonius. (A Northern French Legendary in Lund, here shown with fragments from the National Archives of Norway: Lat. fragm. 21,5-6 and 753,1-2 and 4). (Pdf: Åslaug Ommundsen

This is not an argument of one solution instead of the other – a searchable site with as much info as possible, is useful in any case. A “reconstructed” manuscript can give you a sense of what the manuscript once looked like, and be both informative and inspirational.

Since several fragments from the legendary Vitae 3 were pointing towards Skåne (current day Sweden, medieval Denmark), it is not unlikely that the book’s secondary provenance or place of use was Lund. Lund was not just any town in Denmark, but was the arch see of the Danish Church from 1104 onwards. The legendary was probably not penned in Lund, though, but in Northern France, as indicated by its selection of saints:

9 September: Gorgonius and Dorotheus of Nicomedia

Typical for the scribe is a round and pleasant style, you may notice the round d, the lobe of the a, the shape of the t and the shape of the ampersand. The scribe is highly recognizable, so if more fragments turn up, most likely in the Danish National Archives, he will certainly be recognized.

In the case of this legendary, Vitae 3, the evidence takes us from archival bindings from Bergen to Copenhagen and from Copenhagen to Lund in the early modern period. The manuscript tells an additional geographical tale, namely that of a manuscript travelling from Northern France to Lund, possibly a result of personal connections. Since a manuscript like this legendary could be relevant for so many, hardly restricted to Norway or Scandinavia, the internet is the obvious place to put it.

For us, the purpose of fragment.uib.no was to find the simplest way possible to make a virtual manuscript where you could leaf through the pages. This way of doing it is but one option. Whatever tools people find and apply, the important thing is that fragments are getting the attention they deserve.

A more detailed account of the reconstruction of Vitae 3 is available in Åslaug Ommundsen, “Danish fragments in Norway and their connections to twelfth-century Lund” in Nordic Latin Manuscript Fragments. The Destruction and Reconstruction of Medieval Books, ed. Å. Ommundsen and T. Heikkilä (London and New York: Routledge, 2017) p. 184-220.